Would you like to visit the bay of Saint-Brieuc in Brittany ? Book your accommodation now !

The major events near Saint-Brieuc

Very close to your accommodation 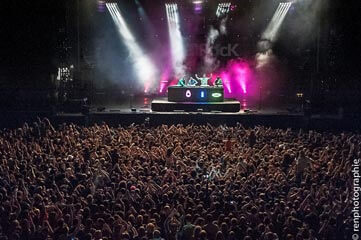 Every year, during the Pentecost weekend, the multidisciplinary Art Rock festival takes over downtown Saint-Brieuc. Music, dance, gastronomy, and street arts are on the agenda.

The Florio Cup a legendary car race created in 1927, organised every 2 years, attracts a multitude of classic cars, invading the heart of the city and the port. Elegance contest, rallye on the coastal and inland roads, historical drive on a steep and hairpined road in town, exhibitions...

The scallop festival takes yearly place either in the port of Paimpol, either in Erquy or Saint-Quay-Portrieux. The king scallop is celebrated during these two days which mark the end of the fishing season! You can taste it cooked on the spot or take it away, buy some fresh shells, and enjoy various funny attractions.

This festival is celebrated each year in memory of the local fishermen who used to sail as far as Newfoundland to capture a valuable fish : the cod. It takes place in the port during the weekend of the Ascension day. Craft market, concerts, exhibitions, boat parade of traditional wooden vessels, guided walks and fireworks. 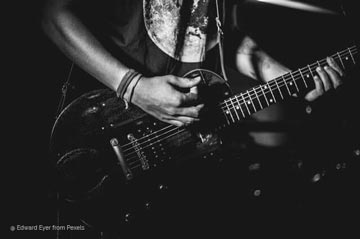 Each year, the organization "La Nef D fous" settles 3 stages on the wharves and along Binic La Banche beach for 3 days of rock concerts. This event is totally free. 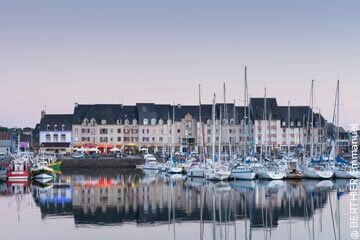 The Sea Shanty Festival is an international musical and maritime event that takes place every two years in the port of Paimpol. Many traditional boats on display at the moorings.

Plélo is 20 minutes away from Saint-Brieuc, and this festive gathering is an authentic experience of Breton musical and dance culture in a wonderful setting. Come and dance An-dros or Polkas with us! 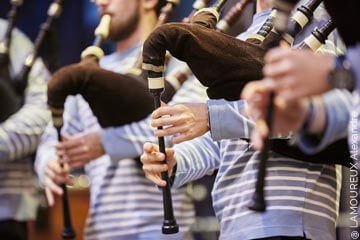 The Saint-Loup festival, dedicated to Breton dance, is one of the oldest traditional festivals in Brittany. Every year, for one week, more than 2500 pipe players and other musicians, artists and dancers from Brittany and other Celtic countries offer numerous performances.

In the whole Brittany May

The Brittany festival - Gouel Breizh, in Breton – spans 10 days during which you can experience the Breton spirit throughout the region. Fest-noz (traditional night parties), concerts, exhibitions, markets, attractions.... Many events are organised to let you discover a creative, innovative and festive Brittany.

Less than an hour's drive away from your holiday apartment

The Bobital first musical event took place in 2009, and ever since, the Bobital festival presents an eclectic and intergenerational program. Every year, many prominent stars and talents from the French music scene come here to thrill their audience.

This is simply the biggest musical festival in France, spanning 4 days with the most eclectic programming, and where young artists rub shoulders with legendary and rising international stars. 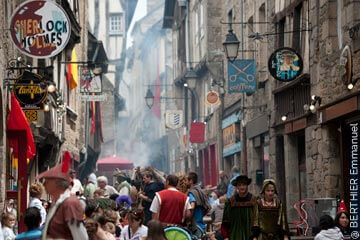 Every 2 years, the Remparts festival takes you back to the Middle Age for a weekend. Shows, tournaments, markets, workshops, balls, parades... animate all the corners of this well preserved medieval city. Put on your linen tunic, your cassock, or your armor before coming : you may be allowed to attend the attractions for free.

Every year, the monumental statue of a Breton saint, sculpted in a Celtic country, crosses the English Channel on a traditional wooden vessel before being led to its final destination, the Valley of the Saints, where it will join a growing collection of granite fellows. 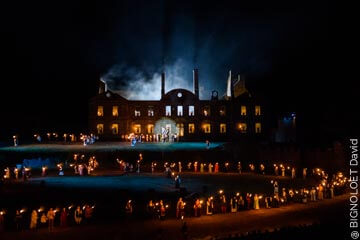 The Sound and light shows of Bon-Repos, consists of a 2-hour night-time historical and epic show, with lighting effects in the mysterious setting of Bon-Repos Abbey. 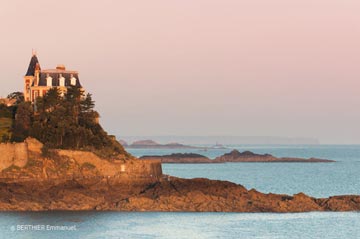 In autumn, the upscale seaside city of Dinard hosts the British Film Festival. You'll maybe bump into some of the biggest names in the UK's film scene, including actors and directors, in one of the 5 screening rooms.

Choose your accommodation to stay in Saint-Brieuc, Brittany

Our 5 holiday apartments are located in the city centre, close to all amenities and the marina. They also provide immediate access to the dual carriageway, which will simplify your journeys in the region.